Heart Attack at 48? It’s Not Common, but Certainly Possible. 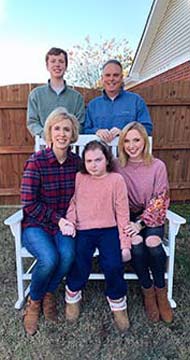 As February kicks off heart health awareness month, David Long, 48, of Alabaster, shared his story of how just a normal Sunday in September turned into a day he would never forget.

It was Sept. 30, 2018, when David suffered a heart attack and was immediately rushed to Shelby Baptist Medical Center by his wife of 23 years, Drew.

“My faith played a key role during the heart attack more than afterwards,” David said. “During the heart attack, my mind couldn’t help but go to people who do not have the faith I had in that moment. My faith allowed me every reassurance of where I was going and that He would take care of my family.”

It was just a typical Sunday for the Long family. They had gone to church, David taught Sunday school, went to dinner with family after service and came home. Afterward, David decided to trim hedges outside, but he soon began feeling lightheaded. He went inside and called his wife.

“He was sweating, his skin color changed and then, when he said his arms were tingling, I just knew he was having a heart attack! I gave him a baby aspirin and we came to Shelby,” Drew said.

Upon arrival, David was met at the door by emergency room staff and nurses. He would later learn he needed an arteriogram to view his arteries so a stent could be placed, which was performed by Dr. Himanshu Aggarwal, cardiologist with HeartSouth and affiliated with Shelby Baptist Medical Center. David also sees Dr. Neeraj Mehta, a cardiologist also with HeartSouth, in Alabaster for regular visits.

“We received top-notch care (at Shelby Baptist). We are very blessed in Alabaster to have a hospital with such good doctors,” Drew said.

David and Drew talked about how they have experienced good care at other places, but the two shared the “hometown feel” at Shelby Baptist is something you just don’t find other places.

“There was a nurse that met me at the door who saw me come in running and screaming. She came up and found me before she left her shift and said, ‘I just wanted to check on you,’” Drew shared. “A few days later, I got a card in the mail from her. You just don’t get that everywhere.”

There was also another nurse at Shelby who David recalled.

“There was a male nurse who cared for me who was so reassuring. He was a very kindred spirit from the beginning and explained to me exactly what was happening.”

After the procedure, David remained around for some observation, but praised Dr. Aggarwal for how he calmed Drew and how the physician complimented her quick thinking.

Though David’s health history didn’t fit the typical risk factors for a heart attack, he still gained valuable lessons from the entire experience.

“I believe everything happens for a reason and sometimes you just need to take stock in the things that matter. And, this has given me the chance to do just that,” he said. “Paying attention to heart health is so important. You must pay attention to things like diet, exercise and stress levels.”

After time at Shelby’s cardiac rehab program, David is back to work at Sallie Mae and to his normal routine with no limitations. He has returned to his active lifestyle of being a father to three children: Mary Grace, 21, Caroline, 18, and Matthew, 14. In addition, he is able to be a supportive husband to his wife, who works relentlessly on getting Caroline’s Cart into more stores nationwide to make a difference in the lives of families with children with special needs.

Her efforts have already yielded results and the cart can be found in Target stores nationwide and other grocery stores chains.

“It’s the only way I can shop. My daughter doesn’t walk, so before Caroline’s Cart, I did not have a shopping option with her. So it makes shopping possible for families like mine,” Drew said.

The Longs shared that one of the biggest motivators in taking the leap of to start Caroline’s Cart was to help share Caroline’s testimony to others.

“Caroline can’t walk or talk, so a big part of her testimony is how her family responds to her situation,” David said. “To see the cart impact so many families is so humbling and so encouraging. We know this is a God thing and we give the glory to God.”