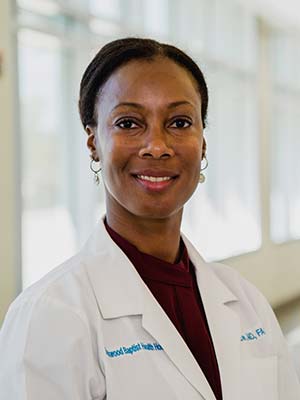 According to a statement released by Becker’s:

“The best healthcare delivery requires leadership from diverse backgrounds and experiences. This list highlights African Americans who have taken on leadership roles across the country at hospitals and health systems as well as in national organizations. Both established and emerging leaders are featured on this list. These individuals influence how their organizations approach healthcare delivery, develop healthcare policy and advocate for the next generation of leaders.”

Dr. Brice-Roshell began her medical tenure at Ochner Medical Center in New Orleans followed by a number of years in Georgia and Nebraska serving at several medical centers as a member of their Hospitalist program before joining Shelby Baptist Medical Center in 2015. Since joining Shelby, she has served on numerous medical committees, including by-laws, credentials, critical care, professional practice evaluation and medical executive, among others.

According to Shelby Baptist Medical Center CEO, Daniel Listi, “Dr. Brice is a tremendous asset to our hospital, and being named for the second consecutive year to this nationwide list of top healthcare leaders reaffirms how incredibly fortunate we are not only to have her as a member of our medical staff and draw upon her experience in her practice of medicine, but also as a leader in her role as CMO.”