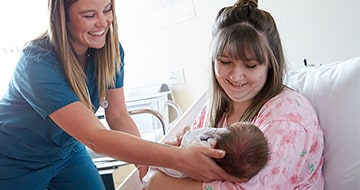 When T’nesheia Davis welcomed home her newborn daughter on April 4, she thought the biggest challenges ahead were dealing with her children and her family’s impending move the next week from Atlanta to Birmingham, Alabama. The last worry on her mind was the possibility of stroke. 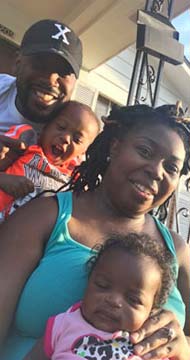 On May 1, the first day of Stroke Awareness Month and less than a month after the birth of her daughter and just two weeks after her move to Birmingham, T’nesheia’s right side suddenly went limp while she was in the shower.

“I just collapsed. I had no signs or symptoms beforehand - my right side was suddenly paralyzed, like a switch was turned off,” T’nesheia remembers. “I couldn’t move or talk at all.”

Luckily, when T’nesheia fell, her husband heard her from the next room. When she didn’t respond to his calls to check on her, he became worried and found her in the bathroom and called 9-1-1. Once the first responders arrived, T’nesheia was unable to answer any questions and she was rushed to Brookwood Baptist Medical Center’s Primary Stroke Center, where it was found that she had experienced a stroke caused by a blood clot in her brain.

“Once I got to the hospital, they gave me an MRI and the next thing I knew I was being rushed into the OR for emergency surgery. It happened so quickly and everyone was so calm that I didn’t even realize that I was having brain surgery at first.”

Dr. Jitendra Sharma, interventional neurologist and medical director of Brookwood Baptist Health’s Primary Stroke Center says, “It is incredibly important that anyone exhibiting any symptoms of a stroke get to the hospital quickly so that we have the highest chance of successfully helping them. There is a two-six hour window where we have the chance of totally reversing the stroke, and it is vital that patients come to us in that time frame. Luckily, T’nesheia was able to get to us quickly so we were able to help her.”

Thanks to the quick action of her husband, T’nesheia is now back at home with her family and recovering. She is slowly working on getting back to her normal life, and has minimal effects left from the stroke.

“The doctors and nurses were amazing and I’m so thankful for Dr. Sharma. Without them, I’m not sure what would have happened. It was so scary and I’m so thankful that my husband acted quickly and made sure that I got to the hospital,” said T’nesheia.

“This changed my life in ways that I couldn’t imagine. I look at life differently now. I am only 33, with a new baby and a two year old, and before this I was perfectly healthy. I thought that strokes happened when you were older, but this was an eye-opener. I want people to know that it can happen to anyone at any age, even if you are as young and healthy as I am.”

To remember the symptoms of a stroke, remember to BE FAST:
Balance: loss of balance or coordination, dizziness
Eyes: Blurry, double vision or loss of vision in one eye
Face: one side of the face droops
Arms: One arm drifts downwards when both are raised
Speech: slurred or strange speech
Time: if you observe any signs of stroke, call 9-1-1 immediately