At 45 years of age, Stephanie Herron celebrates many blessings in her life. She and her husband, David, recently celebrated 30 years of marriage. Together, they have three children and five grandchildren, ranging in age from one to six – all of whom live within an hour of one other. The love and pride that exudes as she speaks about her family is palpable to anyone around. 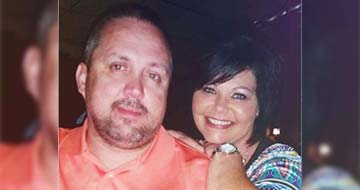 “These babies are my world. My family is absolutely everything to me,” Stephanie says emphatically.

Hand in hand with family in Stephanie’s life is her faith. She has always been a person of faith and takes solace in believing that everything happens for a reason. Little did she know just how much she would rely on that same steadfast faith in January 2019 and in the months that followed.

Convinced she was suffering from a condition related to her gallbladder, Stephanie visited her primary physician, Dr. Emily Williams, at Walker Baptist Medical Center on Jan. 18, 2019. A CT scan would reveal a 15 x 12 millimeter nodule on her lung. While the news wasn’t at all what she expected to hear, it wasn’t entirely surprising  Stephanie’s mother is a cancer survivor.

“All I could do was pray about it and let it go,” Stephanie said. “I knew there was a plan bigger than me.”

“One minute I’m enjoying my daughter-in-law’s birthday and the next I’m in the Emergency Department, but I had no idea I was suffering from a heart attack,” Stephanie stated. “Thankfully I have a persistent husband who convinced me I needed more immediate attention.”

Stephanie’s initial referral to Princeton would first come in the form of an ambulance transporting her following her heart attack where Dr. David Sibley, cardiovascular disease specialist and interventional cardiologist with Cardiology, P.C., would place a stent in her heart to regain blood flow.

“I can’t say enough wonderful things about Dr. Sibley. He’s an angel,” stated Stephanie. “He and his staff took such wonderful care of me.”

One month following her heart attack, it was time to turn her attention back to the lung nodule the CT scan had revealed. With the support of her family and her faith, Stephanie took that next step toward a definitive diagnosis. On Feb. 20, she underwent a PET scan, which showed a new nodule  this time on her thyroid. The results of this test would hit closer to home for Stephanie. It was in fact thyroid and esophageal cancer her mother had battled years prior.

“I knew there was a distinct possibility I was walking in my mother’s shoes, but she was right there with me – along with my husband and entire family – when I needed them most. I was never alone,” Stephanie said.

Three months later, Stephanie underwent another CT scan to determine if the thyroid nodule had increased in size. Thankfully, a biopsy of her thyroid one week later would show the nodule was benign. Finally the pendulum had swung in the direction of good news – albeit temporarily and Stephanie was relieved to say the least.

A full six months following her heart attack and with her strength having resumed, it was time to finally tackle the ominous nodule Dr. Williams had identified on Stephanie’s lung following her initial CT scan at Walker Baptist in January. Dr. Minnich performed the necessary biopsy, and on Sept. 16, Stephanie had her diagnosis – stage II lung cancer.

“Right away, my focus was on what the next step was in the process,” Stephanie stated. “I had seen through my mother what it meant to fight cancer, and I was ready for my own fight. I knew I had a whole support system who would push me through. Even my mother-in-law knows how to fight cancer, having battled pancreatic cancer.”

On Oct. 15, Stephanie would consult with Dr. Katisha Vance, an oncologist at Princeton Baptist Medical Center. Thereafter, Dr. Minnich would place a port in Stephanie’s chest that will remain throughout her treatment.

“I can’t say enough about Dr. Vance and Dr. Minnich. I’m fortunate to have them as part of my team. Everyone at Princeton has been so caring and compassionate, and I feel very confident they have my best interest at heart,” Stephanie shared.

On Oct. 29, Stephanie endured her first round of chemotherapy. She will endure her 12 weeks of chemotherapy just as she has endured so many procedures throughout this year – with grace, her unwavering faith and the love of family. Following chemotherapy, she will undergo removal of her thyroid as a preventative measure, marking the one-year anniversary of when gallstone-like symptoms first prompted her to see her primary physician.

When asked to reflect on what this year has taught her, Stephanie is quick to answer.

“I truly believe that we know our bodies better than anyone, and we have to be our biggest advocate when something doesn’t seem quite right,” Stephanie reassured. “We have to be accountable to ourselves to seek out the right physicians to provide us with answers. I am incredibly thankful to my entire medical team who is walking this journey with me.”