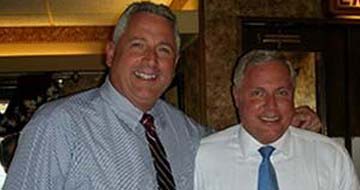 For Florida resident Rick Dexheimer, 60, distance would not be an obstacle to what he felt was the right care after he received a prostate cancer diagnosis. And for him, that care was with the Brookwood Baptist cancer center in the care of radiation oncologist Dr. Roland Dumas.

In 2014, Rick’s brother Bill was diagnosed with prostate cancer at age 57 and before that, the diagnosis landed with their father. Bill, who lives in Birmingham, chose Dr. Dumas for his care.

“Dr. Dumas was great, and he also has a great staff running the Cyberknife machine,” Bill said. “They were fantastic.” Those employees were Drew Wilder and Loretta Warren.

;“I starting speaking to Dr. Dumas back in July or August (of 2018) about treatment options for prostate cancer. From my first call to my final treatment on December 7th, my experience was fantastic,” Rick said.

Rick did have some conversations with people in his hometown in Florida as he considered other options. He said he talked to a surgeon in Florida and a radiologist, but he decided to use Cyberknife as his treatment option.

Cyberknife is a painless, non-invasive treatment that delivers high doses of precisely targeted radiation to destroy tumors or lesions within the body.

“There are so many positive things I could say about Dr. Dumas. He took the time with me on the phone to walk through my options. I probably went into this procedure with more education than the average person because he spent the time with me,” he said. “He told me from the beginning all the options I had to consider and he let me determine the best fit for me. I really appreciated that.”

Rick was very complimentary of the entire staff in working with him on scheduling since he was from out of town. He had five treatments in five days and he visited in late January for his follow up.

Despite distance, Bill and Rick do see each other a couple of times a year and remain in contact often. Rick got great news that his PSA levels had lowered during his recent doctor’s visit.

Bill said he is now 100% after his treatment with no side effects and said this for those considering Brookwood for care. “Brookwood’s cancer center offers the Cyberknife as a treatment option. The whole team is good, very timely and responsive. They are just good people over there,” he said.

Rick said it really was his brother’s experience with Dr. Dumas that landed him at Brookwood for care.

All in all, Rick had this to say about his experience with the Brookwood Baptist Cancer Center, “Everyone on the staff treated me with respect and made me feel special every time I called or visited. From Leslie in the front office to Loretta and Drew who performed my treatment, they were all great. On a scale of 1-10, I would give them a 15. You should be proud to have these individuals on your staff!”