Skip to main content and our Accessibility Statement may be found in the footer of our website.
Back To Oncology Stories
{{CTAButtonText}}

Many of the breathing issues that impacted Greg Morgan are typically found on the medical charts of a smoker. However, Greg’s story of the impact of second hand smoke is one that should definitely be told. 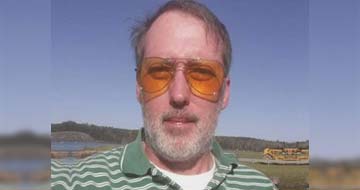 “I was diagnosed with emphysema by age 16 as a result of secondhand smoke and I was born with asthma as a baby. As I grew older, I then developed COPD,” Greg said.

Aside from an occasional cigarette as a senior in high school, Greg is not a regular smoker. Due to bouts with COPD, chronic obstructive pulmonary disease that causes obstructed airflow from the lungs, his condition lead him to Dr. Michael Crain, pulmonologist with Princeton Baptist Medical Center.

“I had blebs on my lung which are like blisters that pop and caused my lung to collapse,” he said. “I had three lung collapses in two years. After Dr. Crain consulted with me. He recommended Dr. Douglas Minnich (thoracic surgeon), who removed 30 percent of my left lung. It had blebs and COPD which caused my collapses,” he said.

Greg’s surgery date was Sept. 11, 2018, and he described what he understood about his condition as this: “I basically learned that 30 percent of the lower part of my left lung had blebs or blisters and was essentially just taking up space,” he said. “So to take out 30 percent of my left lung, I was scared to think what would happen because I was already struggling with breathing. But, the thought was that upon removal that hopefully the healthy part of my lung would expand more and help me breathe better.”

As of mid-December, Greg was still recovering well and hasn’t had any other issues. He has been doing the breathing exercises as recommended by his medical team.

Given Greg had issues with breathing, rightfully so, he worried about losing 30 percent of his lung, but Dr. Minnich was patient with Greg as he made his decision.

“I was scared to have the procedure and Dr. Minnich told me it was totally my decision and didn’t make me feel pressured. He gave me his recommendation, but made me feel it was up to me. I really appreciated that,” he said.

He went on to say the upcoming spring season will truly be a showcase of the benefits of his surgery because in the past, pollen triggered his episodes with his lungs collapses.

“My thanks go to everyone who was involved in my care. The staff showed concern and confidence. Dr. Minnich is very knowledgeable and kind. I would recommend him to anyone who needs a great thoracic surgeon,” Greg said.