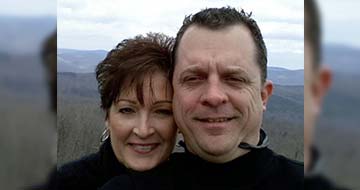 Sheila Flanagan was born with an atrial septal heart defect and at the age of six had open heart surgery to repair it. Over time, scar tissue from her open heart surgery caused atrial fibrillation, an irregular heart beat caused by abnormal electrical activity in the heart that over time can lead to blood clots, stroke and heart failure.

In 2012, Shelia started experiencing AFib on a frequent basis. She was unaware of what was occurring in her body. “My heart would race. It felt so strange and I didn’t know what was happening,” she says. “At one point, I was walking to class at the local community college and by the time I got from the parking lot to my classroom I felt like I had run a marathon.” Her heart rate would increase to 140 to 150 beats per minute during her AFib episodes.

Sheila went to see a cardiologist in Nashville, Tennessee and was told she needed to have a heart ablation procedure. This involves inserting small tubes, or catheters into the groin that are advanced through veins into the heart.  Energy is then delivered by an ablation catheter which electrically deactivates the abnormal heart tissue.

Her first ablation at the Mayo Clinic was not successful and her cardiologist referred her to a pediatric cardiologist at Vanderbilt Children’s Hospital. In November 2012, the second ablation was performed and was also unsuccessful. During the long surgery, she received large doses of radiation emitted from an x-ray camera used to help visualize the heart. This resulted in a significant second degree burn on her back, all while her AFib persisted. After several trips to the ER and a short hospital stay, her AFib was treated through medication. Between 2012 and 2015, her episodes with AFib became less frequent. 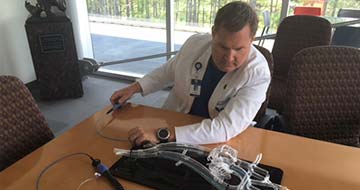 Sheila started a new job in the beginning of 2015. Around the same time her AFIb was starting to occur again and it was getting harder to control with medication. “I had been texting with a new friend from work about my first day and the possibility that I might need to stay home because of my heart,” says Sheila. “She told me about her brother, Dr. Macy Smith, who was an electrophysiologist in Alabama that specialized in the treatment of AFib.”

Sheila traveled from Nashville to Birmingham to meet with Macy Smith, M.D., cardiac electrophysiologistt. “Dr. Smith told me that he thought he could fix me and that he was passionate to do so because of what I had been through,” she says. “Before meeting him, I had no idea there were doctors that specialized in atrial fibrillation.”

In preparation for her procedure, Dr. Smith considered ways to improve and streamline the process of a heart ablation to limit the procedure time and radiation given her prior experiences of receiving excessive radiation. She had her third ablation surgery in April of last year at Brookwood Medical Center.

“I’m doing great and I haven’t had problems with my AFib since surgery,” says Sheila. “Dr. Smith is so passionate about his profession and treating people with AFib problems. He and his staff took such good care of me. I’m so appreciative of them all.” Heart health has become important to Sheila and her family. “My daughter is wearing a heart monitor because of some recent problems and if she has the same AFib problem, I’m taking her straight to Birmingham to see Dr. Smith.” With this in mind, Dr. Smith has since further enhanced heart ablations now performing Zero Fluoro heart ablations without the use of radiation to improve the safety for all of his patients.