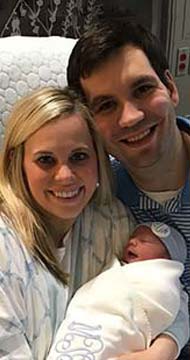 Maggie Worthington Lawrence is a rockstar, because rockstar runs in her blood.

Not only did Maggie endure the final weeks of her second pregnancy in the scorching Alabama heat, but she helped pack, move and unpack a whole house full of furniture, clothes, toys, everything within a few short days of her looming delivery.

She did have some help though. Her biggest helper, was her mother, Piper Worthington (aka “Honey” to Maggie’s son, Banks) who traveled from Atlanta to help get the new house ready to welcome baby #2, a little boy who was due at any minute. To add icing to the cake, Maggie’s sister-in-law, Homewood-resident Carly Worthington, was also due at any minute with her first child (also a boy), and both would be delivering at Brookwood Baptist Medical Center within days of each other. Needless to say, it was an exciting time for the entire Worthington family!

But on the night of May 25, 2018, Honey, who Maggie says “goes 100 MPH and gives 100% to everyone and everything” suffered an unexpected heart attack.

“She went to the emergency room kicking and screaming”, Maggie remembers. “She just thought she had pulled a muscle or something. It was completely out of the blue”.

Once she arrived at Brookwood Baptist Medical Center, an EKG showed that she had actually suffered a heart attack. The next morning, a heart cath showed she had blockage in 3 arteries of her heart: one was 100%, another 90% and another 75%. 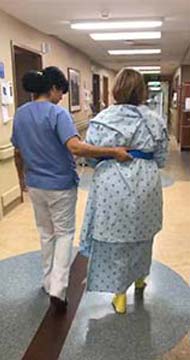 But because she lives in Atlanta, she and the entire Worthington family had no real way of knowing that she would be in good hands. That all changed once Dr. Russ Ronson was assigned to the case.

With the help of fellow physician Dr. James Cavendar, Dr. Ronson rapidly eliminated all of the family’s fears by agreeing to review his plan of action via telephone with the Worthington’s family friend in Atlanta, who just so happens to be a cardiac surgeon. Once the Worthington family received the stamp of approval from Atlanta, Dr. Ronson’s team sprung to action & proceeded with Honey’s triple bypass aka open heart surgery.

In those scary moments, it was in Honey’s selfness nature to be more concerned about others than herself, but more importantly, she was worried about not being there when her two new grand babies were born. But again, Dr. Ronson offered her the peace of mind she so desperately wanted.

“I promise you,” Dr. Ronson assured her. “If one of those babies is born at this hospital, and you’re still in the hospital, I will wheel you over there myself and let you love on them”.

But thankfully, that wasn’t necessary. 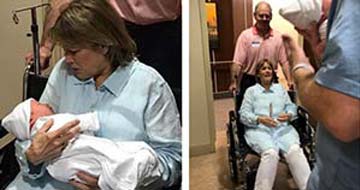 Three days later after surgery, on the evening of June 1, Baby Teddy (the son of Carly & Will Worthington) made his big debut in the Women’s Center at Brookwood Baptist Medical Center. And finally, only two days after Teddy was born, Honey was officially discharged from Brookwood’s cardiac unit. She wasted no time in hailing down a wheelchair to take a detour to meet her newest grandchild. It was a moment of pure joy that she will never forget.

But the joy didn’t stop there. Nor did the drama.

Three days later, Maggie was induced to deliver her second child, and absolutely nothing went according to plan.

Maggie’s original OBGYN , Dr. Julie Taylor with OBGYN South, had just given birth to her own child the day prior. So Dr. Maurine Batson, another physician with OBGYN South, stepped in, promising to check on Maggie around lunchtime. 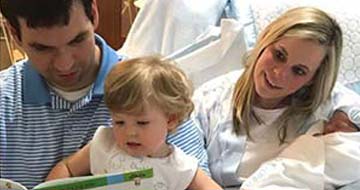 But, to throw another curveball into the plan, Maggie’s baby decided he was going to work on his own timeline and threatened to make his appearance not long after Dr. Batson had left the room; but by then, Dr. Batson had unexpectedly been pulled into an emergency situation and was not available.

Meanwhile, down in the OBGYN South office, Dr. Jon Adcock had just sat down to eat his lunch, when he received a frantic call from a nurse up on the labor & delivery floor. He darted over to Maggie’s room and after only four pushes, delivered little Briggs Worthington Lawrence into the world.

Through it all, Maggie still says it was “a great day, even more so because Honey was there in the delivery room.” 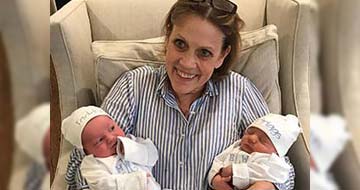 Dr. Adcock couldn’t have agreed more. In fact, after praying over Briggs & thanking God for the miracle of life, Dr. Adcock looked to Honey and said, “You know, the ultimate miracle here is you. You were here for the birth of your third grandchild after undergoing an open-heart procedure a week ago. That’s the miracle here”.

Honey is now back home in Atlanta and says, “My restored heart is so full and beating stronger than ever. Thanks be to God, the doctors & nurses, family, friends and my now three grandchildren who are the best medicine the doctor prescribed!”

Congratulations to the entire Worthington family for all their new additions and our best wishes to Honey as she continues to recover.