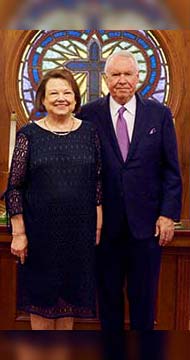 Seventy-four-year-old Myra Elliott was just 19 years old when she married her now husband of 54 years, Wayland, age 76. With three children and eight grandchildren, the have been through a lot together. However, never would Myra have imagined that a trip to the gastroenterologist’s office for what she perceived was chest pain due to acid reflux would begin her journey that would ultimately lead to open heart surgery.

“I visited the gastroenterologist and he said that my acid reflux was not where my chest pains were coming from, and he recommended I see a cardiologist,” Myra said.

Shortly after that news, Myra was seen by Dr. Dave A. Cox, cardiologist with Cardiovascular Associates, also affiliated with Brookwood Baptist.

Dr. Cox determined Myra needed an arteriogram, a procedure to evaluate her blood vessels and determine if there were blockages around her heart that were causing the same symptoms and could possibly put her at risk for a heart attack. What he saw during this procedure would soon change everything.

After the arteriogram, according to Wayland, “When they came out, I thought it was funny because there were two of them. At this time, I was introduced to Dr. Mac.”

“Dr. Mac” as he is affectionately known is Dr. William McAlexander, cardiothoracic surgeon with Brookwood Baptist Medical Center, who was among the team of physicians Dr. Cox engaged on Myra’s case.

“Dr. Cox shared with me that during the procedure he saw things that indicated Myra would need to have open heart surgery. Unfortunately, she had some blockages,” Wayland said. “They gave me a book that had a diagram of a heart. They took a pen and drew the main arteries of the heart to show me where the blockages were.”

On February 4, Myra underwent a coronary artery bypass grafting (CABG), an open heart surgery procedure to create “bypasses” around the blockages to improve blood flow to her heart.

“After surgery, Dr. Mac even took out his phone to show me her heart beating and I saw two of the four bypasses,” added Wayland. “They went the extra mile to make sure I understood what was happening. Basically, she was a heart attack waiting to happen.”

According to Dr. McAlexander, “Myra’s presentation was ideal for a CABG, and the procedure went exceptionally well. We were able to improve blood flow around the blockages, and the team was quite pleased with the outcome.”

Dr. McAlexander added, “Myra and Wayland were a delight to meet and I feel privileged to have had the opportunity to be a part of this case. We have so many wonderful patients that come through our doors at Brookwood, but this couple in particular – their devotion to one another and their genuine appreciation for what we were able to do for Myra during her time of need – will stay with me for some time.”

After nearly 55 years by Myra’s side, even for a tough former football coach, this was indeed difficult news for Wayland to digest, but he was incredibly grateful for the calming demeanor of both physicians during this trying time.

“I came to Birmingham as a football coach at Samford University. I was a lot younger and I thought I was 10 feet tall and bulletproof, but I guarantee when the doctor told me what was going to happen to her… I wasn’t,” Wayland said.

Myra later said the fact that the doctors took the time to walk them through all the possibilities of what could have happened helped them so much. Wayland complimented their nurses Becca and Joanne for their care, but truly praised all the nursing staff during their stay. She also emphasized that their church family was helpful during this time.

“We believe in prayer and that has helped. Our Sunday school class at Dawson has been praying for us, and a minister came to visit with us,” Myra said.

With February being Heart Month, the Elliotts now recognize more than ever the importance of heart health. They hope their story encourages others to listen to their bodies and learn the signs.

“This was not what we expected. When we pulled in to get the arteriogram on Friday, we were planning to go back home and never thought we would have to stay,” Wayland said.

Though Myra’s story advanced far more than she could have ever imagined, she is grateful for the support of her children, family and friends. She is also thankful for her ‘special someone’ she says has always been there for her.”

“My husband is a big part of the story. I’m so thankful for him. I tell him to pray for me when I don’t feel good and it always helps. He’s a big part of my life and my story,” she said.

While the need for open heart surgery was certainly unexpected news, Myra and Wayland agreed the lifesaving diagnosis and superior care received at Brookwood Baptist Medical Center was their happy ending.