Skip to main content and our Accessibility Statement may be found in the footer of our website.
Back To Bariatric Surgery Stories

“I knew whether it was going to be bad or good I had to do it, because either way I was going to die. I was either going to eat myself to death or I was going to die in surgery. To me, there were more pros to doing it than cons, so I did it and it has changed my life,” said Tiffany Cochran, 34, gastric bypass patient of Dr. Cameron Askew with Brookwood Baptist Medical Center.

Ah, the famous before and after picture. It’s a goal of many at the beginning of the year, but just how did our patient Tiffany Cochran get to be the woman on the right of the photo?

Tiffany’s story began with overcoming bullying, battling obesity and then losing 115 pounds with diet and exercise. But, then during a high risk pregnancy, which included her going into heart, liver and kidney failure, 85 of those pounds returned. 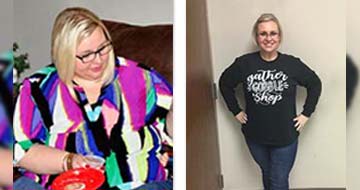 But, her story doesn’t end there. It couldn’t.

She now had a little boy named Kayden, who needed his mommy. Tired of her weight being a hindrance, she made the life-changing decision to have gastric bypass surgery.

“I saw I wasn’t able to play with my son like I wanted to. I couldn’t do a lot of walking, so this was something I was going to do,” she said. “I did it and it has literally been the best 18 months of my life.”

Dr. Cameron Askew, bariatric and general surgeon, said this about the procedure, “Gastric bypass results in weight loss by restricting food intake and altering the digestive process. We create a small pouch from the upper stomach that serves as the new stomach and connects to a limb of small intestine that bypasses the first portion of the small intestine. This results in both a restrictive and mildly malabsorptive operation that is very effective for weight-loss.”

“I remember in sixth grade, there was one of those ‘mean girls’ as you call them and I was beat up in the girl’s bathroom,” she said.

Tiffany said growing up she was always the heavier child compared to her brother and sister and that obesity was present in her mom and dad’s families. She recalled always hearing people say, “Oh, you are such a beautiful girl, you have such a pretty face.” She went on to add, “I have always been the girl with the face but not the waist.”

Throughout life, Tiffany continued to struggle with her weight. In her early 20s, she reached 260 pounds and decided to focus on her health. As a result, she achieved a 115 pound weight loss with diet and exercise. 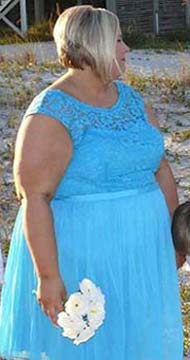 This weight loss was indeed a milestone for Tiffany and soon afterwards she met her husband Kevin. Later, they learned they would be expecting a baby boy.

“During my pregnancy, I went into heart, kidney and liver failure at my fourth month, I was so sick and bed ridden the whole time. I gained 85 pounds but the weight was already creeping up before that,” she said.

At this point, she was 295 pounds, 31 years old and had a new family. Though she went through the seven month prep period once before for surgery, she backed out due to fear of complications.

Dr. Askew spoke about those fears patients may have prior to surgery, “Bariatric surgery is not cosmetic surgery, and it is surgical weight-loss for your health. The risks of morbid obesity far out-weigh the risks of bariatric surgery. Overall complication rates of surgery are actually very low. If you are trying to decide whether or not you want to have bariatric surgery, you do need to be completely committed to lifestyle change,” she said.

So after more prayer, Tiffany decided to revisit the idea of bariatric surgery.

“I was eating myself to death. I knew of Dr. Askew and after meeting with her, I knew I wanted to have her do my surgery. There is just a sense of peace that she gives off and she is so knowledgeable. Her and her staff are amazing, they helped me so much,” she said.

Tiffany went from a size 24/26 in pants to a 12/14 and from a size 4X to a large in scrubs. She said her support system has helped so much through this journey.

“I’m grateful for my support system because you can gain the weight back and that’s scary. You have to be conscious when you make those food choices every single day. Surgery is a tool, not a miracle.”

Without a conversation about it, one may never know that despite all life has thrown at Tiffany to overcome there is still more to her story.

Tiffany’s grandmother who raised her is now battling stage 3 breast cancer and started chemo in November. Her mother, who battled with addiction, passed away just six months ago.

Even still, Tiffany continues to persist and focuses on encouraging others.

“I have a passion for bariatrics and health and I am helping people before and after surgery which includes the beginning questions and even showing them how to do meal prep,” she said.

In addition to Dr. Askew, Tiffany also credits additional Brookwood Baptist doctors for their help on her journey.

“If it wasn’t for my OBGYN, Dr. Jamie Routman (Brookwood Women’s Health), I wouldn’t have gotten through this process, she helped me so much. Dr. John Morgan (Bariatric Health and Wellness) was also there for me and his staff was there each time I needed them to answer a thousand questions,” she smiled and said.

She said she still visits his clinic to stay on track and to purchase his nutrition bars along with the protein-filled hot chocolate, which she loves to have to start her day.

For those considering bariatrics surgery, it may seem like a daunting process, but while Tiffany feels doing your research is key, she also stands firmly behind her recommendation, “I have to 100% recommend Dr. Cameron Askew and her staff for any general surgery or any bariatric surgery she’s a great general surgeon also.” 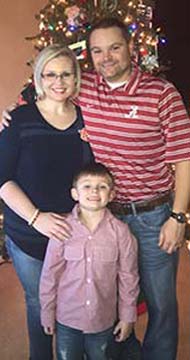 She also shares she is open to speaking with people who may be considering the surgery. As a part of next steps, she will pursue skin removal surgery and hopes to lose about 30-40 more pounds.

“I know how it feels when you are sitting home with a tub of ice cream. I have been there. I have done it. But, I now do different things when I am feeling stressed or feeling a little depressed,” she said. “Since I have been there, I now I just want to be an advocate for the next person.”

Dr. Askew said she encourages patients to have the long-term goal of eating a balanced and healthy diet and also to remain active. To also encourage that, she added they have a personal trainer as a part of their team as a resource for their patients.

“Bariatric surgery is the best tool that we have for long-term weight loss but it is just that - a tool. It is not easy and it still requires change and commitment to be successful long-term,” she said.

Tiffany now enjoys lots of quality time with her son, now 4, and her husband. For those that want to know more about Tiffany’s experience, she is open to being contacted at tiffcochran1@me.com.