Jul 6, 2015
Over the Mountain Journal – May 5 – Andrew Tyson is a man of many talents — when he isn’t working full time at Brookwood Medical Center, he’s honing his talents as a professional photographer and creating artwork. 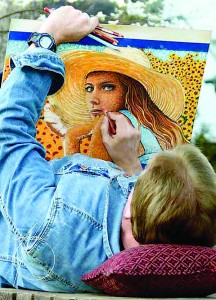 Tyson is a lifelong Homewood resident and calls himself a self-taught artist.


“I was rejected from art in high school because my teacher didn’t approve me (for the class),” Tyson said. “After high school, I took up photography as my means of creative expression, and it wasn’t until college that I began to draw. I was going to have to take art, but my program director indicated that I was better than their teacher, so instead he had me produce a certain number of drawings, and I got exempted from taking art. In high school I was rejected from art and in college I was exempted – go figure.”

Tyson draws inspiration through the grace of God, he said. His interest in stained glass was sparked when he decided to create a large piece for his backyard. After taking a class on stained glass, he began experimenting.

“I began to try different things,” Tyson said. “In the process, I found that I had an abundant supply of colored glass right in my backyard — Homewood Park creek. I like knowing that I am creating ‘art’ by cleaning out the local creek and area.”

After he collects glass, Tyson brings it home and smashes it up in a plastic tub before placing it in a rock tumbler. The tumbler smooths the edges while also giving the glass a frosted look, he said. Once this process is completed, Tyson begins working on putting together what he calls a large jigsaw puzzle without a picture.

Tyson collects glass from two main sources. He has a spot at Central Park and over towards Green Springs Highway where he can find ample glass easily, he said. However, he isn’t afraid to divulge his sources. 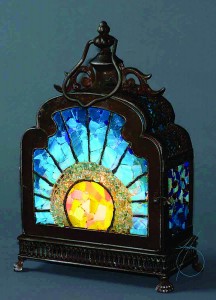 “I had someone ask me, ‘If everyone began to go to the creek and collect the glass, aren’t you afraid that the glass would no longer be found?’” Tyson said. “I am quick to say I have no problem with that. It would be nice to have all of the glass gone. If more people could get inspired with the thought of gathering and recycling the glass around town, then that would be wonderful.”

Those interested in Tyson’s work can see it at Little House Gallery in Homewood or at annual shows presented by the Mountain Brook Art Association, of which Tyson is a member.

He has also been published multiple times in Birmingham Arts Journal and has partnered with Miss Alabama Pageant for a decade doing portraits of winners.

His artwork was recently selected to be displayed at Brookwood Medical Center as a part of its Earth Day celebration.