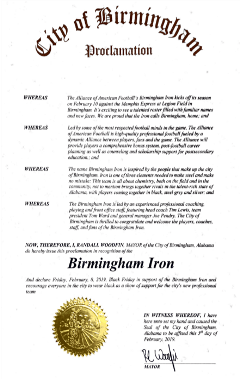 The Alliance of American Football’s Birmingham Iron is ready to take the field this Sunday for its inaugural season home opener against the Memphis Express. The game - sponsored by Brookwood Baptist Health, the official health care provider of the Birmingham Iron - will be played at Legion Field February 10 at 3:00 p.m.

By proclamation, City of Birmingham Mayor, Randall Woodfin, announced Tuesday during the City Council meeting that Friday, February 8 is officially declared ‘Black Friday’ in support of the Iron and encouraged all Birmingham citizens to wear black as a show of support for the Iron’s  home opener Sunday.

To further the ‘Black Out Day’ theme, the first 20,000 fans will receive a free Black Out T-shirt courtesy of Brookwood Baptist Health. Also in attendance will be 10,000 Central Alabama students and parents/chaperones with complimentary tickets courtesy of the Iron and Brookwood Baptist Health to promote the Iron Kids Program, which is aimed at preventing childhood obesity by promoting physical fitness among area youth. The program - presented by Brookwood Baptist Health and co-sponsored by Blue Cross Blue Shield of Alabama - was initially targeted toward Birmingham City Schools and has now expanded to include Alabaster City, Chilton County, Shelby County and Talladega City Schools. 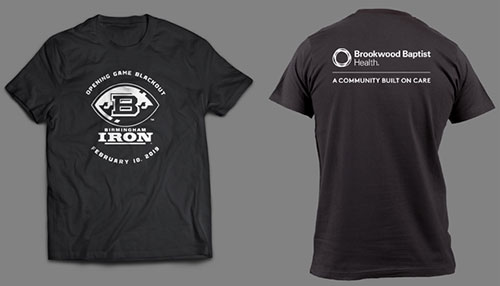 Numerous festivities are set to take place during pre-game and throughout the home opener. The UAB Blazers championship football team and head coach, Bill Clark, will be honored during halftime. Iron Workers Local No. 92 will debut a 500-pound anvil they manufactured specifically for this event, which will be struck to signal the Birmingham Iron players charging the field. Honorary captains for the home opener will include: City of Birmingham Mayor, Randall Woodfin; UAB Coach, Bill Clark; and Brookwood Baptist Health CEO, Tim Puthoff with the official game ball delivery by Mayor Woodfin.

“This is an exciting time for Birmingham and we are proud to be a part of this inaugural season,” stated Tim Puthoff, CEO, Brookwood Baptist Health. “Our system has been caring for patients across Central Alabama for more than 90 years. To be able to expand our community built on care to help these athletes maintain top physical condition and perform at their best is an honor.”

For more information or to purchase tickets, visit www.birminghamiron.com.