Back To Home
{{CTAButtonText}} 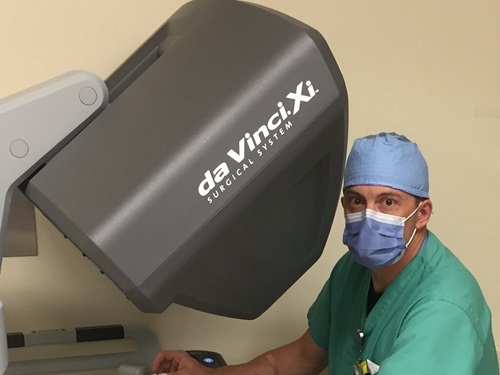 Alabster, AL – October 4, 2017 – Shelby Baptist Medical Center is pleased to announce the inauguration of the new da Vinci Xi Surgical System, further complementing the hospital’s minimally-invasive robotic surgery capabilities.  The practice of medicine has and continues to evolve. One of the biggest assets to our profession has been the advancement of minimally invasive surgery. The da Vinci Xi system is the next frontier for minimally invasive surgery combining the latest assisted surgical technologies which allows for easier access to targeted areas.  The first case was performed by Charlie Braswell, M.D., general surgeon at Shelby Baptist Medical Center, on August 30, 2017.

The technology was initially adopted for prostatectomies and gynecology, and the da Vinci Xi robot is becoming more commonly utilized in general surgery in the last few years.  Today, the da Vinci Xi can be used in hernia repair, thoracic surgery, gynecological, pelvic floor and abdominal procedures including gallbladder, colorectal and a number of other procedures.

Shelby Baptist Medical Center will host a robot naming contest and hands-on event to feature the new technology on Tuesday, October 10, 2017 from 4 – 6 pm in the north lobby the hospital near the Women’s Center. Employees and media in attendance will be able to “test drive” the da Vinci Xi robot to get a feel for what it's like to be in control of the machine. They will also be showcasing the telehealth robotic technology utilized at the hospital.. For more information on minimally invasive surgical options visit https://www.brookwoodbaptisthealth.com/.