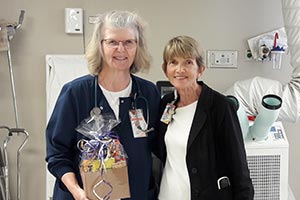 From Heather’s nomination form: “A patient and his wife arrived at BBMC after evacuating from Panama City as Hurricane Michael approached. They live in Arkansas and had been vacationing in Panama City. They stopped here in Birmingham overnight in their journey. Unfortunately, the next morning, the patient fell in the parking lot of the hotel and broke his hip. He was brought here to receive surgery for his hip followed by physical and occupational therapy on the Rehabilitation unit.

The patient's wife shared their story with Heather Reed Horton, a nurse on the rehab unit. Heather’s heart was touched by their plight as well as the plight of so many in Florida affected by the storms. The patient’s wife was uncertain about how to retrieve their belongings, which they left behind during the evacuation. Heather and her husband felt led to take supplies to storm victims in Florida and added retrieving this couple’s belongings to their list. On Friday, Oct. 26, Heather and her husband left Birmingham with a truckload of supplies donated by employees and others and drove to Panama City. They donated supplies to Samaritan’s Purse, a non-profit organization working in the area, picked up the stranded couple’s belongings and returned to Birmingham on Saturday.” Read more of the story here.